It is fairly easy and unobtrusive to end users to obtain a memory dump from a running .Net application, in order to track down a memory leak or other anomaly. The actual viewing of the dump is far more complicated. In this post, I will describe how to obtain the dump and the basics of viewing it. At the end there is a reference section that lists other documentation to further help with viewing and finding leaks and other anomalies.

In order to do anything with a memory dump, you need to have the Windows Debugger (WinDbg) installed. The latest version can be downloaded from Microsoft’s web site (http://www.microsoft.com/whdc/devtools/debugging/installx86.mspx). It is a Windows installer – just install as you would any other utility.

If you need to obtain a memory dump from a customer or test machine, and do not want to run the installation, you can actually just copy the root directory of the installation to the machine, via a thumb drive or other simple means.

One thing to note before actually proceeding: while you have the debugger attached to the process, the process will not be running. This will be apparent to users, so you will want to make sure you coordinate with them before doing this. Also note that if you do not disconnect the debugger properly, you will terminate the process, which the users will notice.

Start WinDbg from the Start Menu:

Or via Windows Explorer/Command Line:

Once you have WinDbg started, you’ll need to attach to the process you wish to monitor. Select “Attach to a Process…” from the “File” menu: 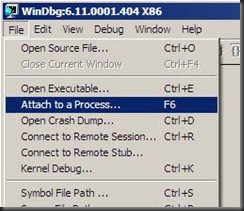 The debugger opens a window. In that window, the top area has the status and command output, the bottom has a line for entering commands. Note that by using the up arrow key, you can scroll back through past commands. 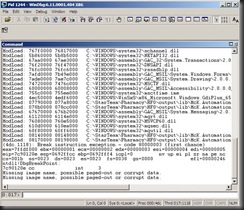 To obtain a full memory dump, which is the easiest thing to work with offline, you will use the .dump command with the /ma option. It will look like this:

At this time, you have your dump file. You can detach the debugger and let the users go back to work. The command to detach is .detach, and it will result in the ending of your debugging session, with the application back in a running state as if nothing ever happened:

Open the “Crash Dump” via the “File” menu (All memory dumps are referred to as Crash Dumps in the debugger, even if no crash was involved):

The first things you need to do is load the extensions for .Net debugging. This is a library called SOS.dll, and it lives in the same location as the .Net libraries. The easiest way to load it and ensure you are getting the right version is to use the .loadby command:

This command is a little disturbing, because it only reports failure, so you will not get an acknowledgement that it worked. If you see nothing in the output other than an echo of the command, it worked:

What this command means is load the SOS.dll from the same location you loaded the MSCORWKS.dll, which will be the .Net Framework directory. This is far easier than typing the full path to SOS.dll.

Now that you are all set up, the first thing you want to check is the relative amount of space used by different .Net objects. To do this, execute a !dumpheap –stat command:

All of the objects in the heap are listed by their class, in order from least memory usage to greatest, for the object class. It shows the number of instances (count) and the total size of those instances (TotalSize). Note that this is a shallow size – the memory consumed by the object itself, not any child objects it holds. This can be quite deceiving, but it is a good starting point.

Its best to look through the list from the bottom up, and see if you can notice anything that seems unusual (multiple instances of a particular form, for example, or large quantities of simple objects). When you discover something you want to further investigate, you can find the actual object memory addresses by using dumpheap with the name of the type (or you can use the value from the first column, MT). So, if you wanted to see more information about all 4 instances of System.Drawing.Color:

Either of which will produce:

From here you can see the size of each object as well as the address where it resides. If you want to further investigate an object, this address is necessary. You can get more detail about the object using the !do command:

Here we see the fields that make up the object. Notice that in the Value column, if the field represents another object, the value will be the address of that object.

Another useful operation is to determine what object chain is keeping it in memory – in other words, the path from the object to the Garbage Collector root object holding it in memory. To do this, we can use the GCRoot command (note that this command can take a really long time):

This can show the parent (and further chain upward) of an object, which can be useful.

Here are some better sources for more information about how to dig deeper into memory dump exploration:

· Getting Started with WinDbg: http://blogs.msdn.com/johan/archive/2007/11/13/getting-started-with-windbg-part-i.aspx